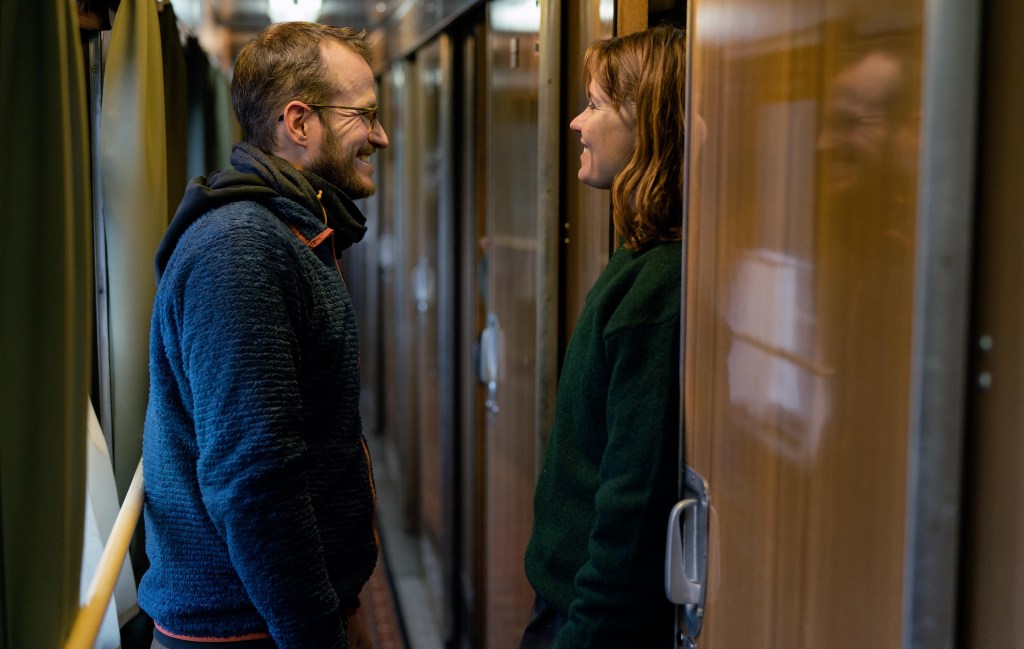 Following his 2016 Un Certain Regard win with “The Happiest Day in the Life of Olli Mäki,” Finnish director Juho Kuosmanen is back in Cannes with “Compartment No. 6,” and this time, in the main competition. Inspired by Rosa Liksom’s book, it follows two strangers on a train to Murmansk, Russia: a young Finnish woman, dreaming of seeing ancient petroglyphs, and a Russian miner.

The action takes place on the train for most of the story. What were the challenges of staying in a confined space?

We departed from St. Petersburg and shot on the train for almost two weeks. But we didn’t go all the way to Murmansk, even though that was our first idea.

One obvious reference point was Wolfgang Petersen’s “Das Boot.” It might have been easier to shoot in some studio, but it just wouldn’t look that convincing. All these corridors and compartments, these are really small places. You work slower, because no one could fit there — except for my DP, J-P Passi, and his assistant. I like to be with my actors and now I had to watch them on the monitor. It brought so much to the film though, this whole claustrophobic tension. But I was happy to get out and shoot on location for a bit.

In your previous film, Oona Airola delivered an incredible performance. And this film features a strong female character.

Seidi Haarla [as lead character Laura] was the first person I cast. In the book, the balance between these two is off. He is taking up all this space, she is so quiet. We wanted to have a stronger female character, right from the start. She is strong, funny, not some fragile girl you should worry about. That’s what I felt was important — I didn’t want the viewers to worry that something bad was going to happen, that she would get assaulted. They are locked there together, in this tiny compartment, so your mind starts to wander: “Is she going to survive? Is he going to rape her?” I wanted them to be equal.

In the book, he felt much more threatening.

When we were still working on the script, we were more faithful to the book. Now, this guy is younger, more approachable. That’s why we changed his name to Ljoha; he became this whole other person. We were free to do that, because Rosa Liksom basically told us to. She said the book is hers, but the film is mine.

Finding these two was the hardest challenge. We were thinking about casting an older guy, between 45 and 55 years old, and I just didn’t believe the story! Then, I saw Yuriy Borisov in “The Bull” at Karlovy Vary. They look like brother and sister, as if they shared the same childhood. It’s not your usual love story; it’s about connection. They understand each other, even without words.

I wasn’t sure when this story took place. It was Laura’s Walkman and the mention of “Titanic” that finally gave it away.

The book is set in the 1980s, so we changed that as well. I am happy to hear that you weren’t sure — that’s something we wanted to achieve. There are no smartphones here, so that’s one thing. I didn’t want her to feel connected to her friends all the time, or that she can Google something. She actually depends on other people’s help.

Also, with a country like Russia, with such a complicated history, once you decide on a specific year, all these political connotations come pouring in. I wasn’t interested in that — I was interested in these two people.

It’s almost funny, watching this film during the pandemic. It’s about people stuck in a confined space, and so relieved after they finally get out.

They closed the borders two weeks before we were supposed to wrap, and we decided to stay in Russia. We worked with a small crew, but we managed to do everything that we wanted. We got very lucky. We actually had to smuggle the last film stock into Finland. The Russian driver took us to the border and there was nobody there. It was like entering a ghost town.

There is this moment in the film when Ljoha asks her about Moscow. She says: “There were people, there were parties, laughter and music. And now it’s all gone.” It really hit me. Now, it has more meaning than ever. All these normal, basic things were suddenly taken away from us.