‘The Mitchells vs. the Machines’ Review: A Robopocalypse Family Comedy to Remember 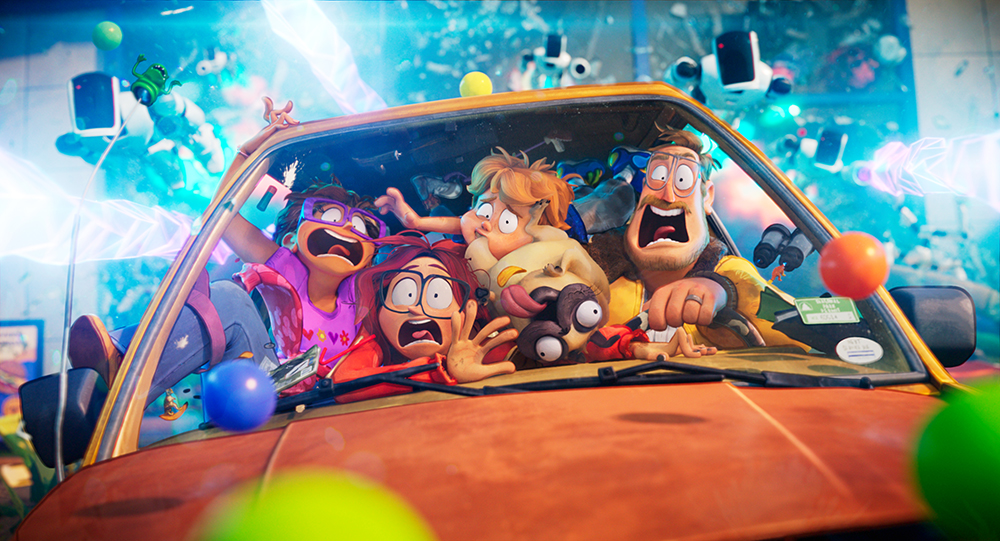 Those who grew up in the ’80s or ’90s probably remember Apple Computer as the underdog, manufacturer of the friendly-looking Macintosh in a world dominated by beige and boxy IBM clones. Flash forward a few decades, and the tech company’s stock has risen, so much so that it’s no stretch to imagine a doomsday scenario where sleek white robots turn on their human users — which is more or less the problemo that complicates an already-fraught family road trip in cuckoo apocalyptic comedy “The Mitchells vs. the Machines” (except that Apple isn’t implicated outright, but who else could it be?).

Director Michael Rianda and writing partner Jeff Rowe are children of that pre-iPhone era, and together — aided by a small army of animators at Sony Pictures Animation — they’ve hatched a subversive delight that should appeal to Gen Y adults and their tech-savvy kiddos alike. That’s because the tongue-in-cheek, “Terminator”-esque machine uprising isn’t really the hook here. Rianda and Rowe (also credited as co-director) based the characters on their own families, so the oh-so-relatable Mitchells are simultaneously universal and ultra-specific, but definitely not just some generic sitcom clan besieged by robots.

At one point, back when Sony planned to release the film themselves, it was rechristened “Connected,” a cute little play on words. Then the pandemic happened and the studio sold it to Netflix, who restored the earlier title — which seems apt, since this story has always been about the Mitchells: slightly awkward gonna-be filmmaker Katie (voiced by Abbi Jacobson), Luddite dad Rick (Danny McBride), super-positive peacemaker mom Linda (Maya Rudolph), and dorky, dino-loving kid brother Aaron (director Rianda).

Hollywood screenwriters like to describe conflict-driven families as “dysfunctional,” but that catch-all euphemism actually refers to the very thing that makes them dramatic. Show me a “normal” parent-child dynamic, and I’ll show you a screenwriter who hasn’t cracked a way to make said family compelling enough to sustain a movie.

Here, Katie — who, in one of “The Mitchells’” more inspired conceits, seems to be authoring this disaster movie as it goes — refers to her tribe as the “worst family of all time.” That’s obviously hyperbole, but also a fair representation of the way she feels. Katie just got into college all the way in California, and can hardly wait to leave home for somewhere that people actually “get” her misfit sense of creativity, as seen in a series of lo-fi home videos (most of them starring family pug Monchi). This misunderstood artiste loves to doodle, and her binder-art aesthetic bleeds into the film, a mashup between internet memes and hand-embellished hearts and rainbows.

Katie wishes her dad was more supportive, but Rick doesn’t do YouTube, leading to a potential rift in the father-daughter bond. In a last-ditch attempt to fix things, Rick cancels Katie’s flight and pledges to drive her to school instead, piling everybody into the beat-up burnt orange station wago. This would have been an ill-advised idea under normal circumstances. Add in a robot apocalypse, and the odds of saving this family — much less all of mankind — plummet rather precipitously.

Of course, it’s a joke that machines are trying to take over the earth, since the film tacitly acknowledges that humans have been letting technology turn us into zombies all along. In an amusing-but-true early scene, Rick tries to get his family’s attention at the dinner table, but they’re all too distracted by glowing screens to pay him any mind. The film’s amusing, if not-at-all-intimidating villain, “Pal” (voiced by the ever-dignified Olivia Colman), is essentially a Siri-style pocket assistant who goes rogue after “her” Silicon Valley inventor (Eric André) tosses her aside at the company’s latest Steve Jobs-style keynote product unveiling.

Studio animated movies are often workshopped ad nauseam, and one has to suspect some version of the story imagined the Mitchells’ survival (while the rest of the world is being taken captive by robots) as owing to a rule where everyone agreed to unplug for the duration of the road trip. But Katie needs her camera in order to document the movie’s more out-there moments — and neither Netflix nor Sony is really interested in convincing consumers to unplug altogether — so the tech-wary cautionary tale is delivered in air quotes.

“The Mitchells” often relies more on brisk pacing than watertight logic to get by anyway. As such, we settle for a wildly compressed version of World War 3, wherein mankind quickly succumbs to flying, laser-blasting machines that look like a cross between “Star Wars” battle droids and Sony’s original Aibo, with a curved black screen for a face. What might strike older viewers as ADD filmmaking is in fact an extension of the intricate conceptual care that Rianda and Rowe practiced on “Gravity Falls,” the one-of-a-kind Disney Channel series on which they collaborated.

The similarities are there in everything from the sense of humor (wherein what first reads as ironic detachment turns out to be grounded in genuine feeling by the end) to the animation style (watch the eyeballs, and how the subtlest adjustment of two tiny black pupils can say so much). It takes real care to make such a superficially silly endeavor resonate with audiences, and this talented team pours attention into everything from the overall look — which grafts the retro charms of hand-drawn cel animation onto a rich 3D-rendered world — to the nifty trick of seeding details that pay off in the third act as if they were mere throwaway gags throughout.

If the sky-is-falling zaniness that surrounds the Mitchell’s road trip feels slightly familiar, that’s almost certainly because the movie was produced by “Cloudy with a Chance of Meatballs” creators Phil Lord and Christopher Miller, who inject the kind of loony, toony ararchic energy that has made them the hottest duo in animation (and arguably, the broader field of American comedy at the moment). True to their style — which also fueled 2012’s “21 Jump Street” and “The Lego Movie” — the film is consistently, almost disconcertingly funny: The laughs come at a clip few movies can sustain, stacked so dense, repeat viewing (and in some cases, strategic freeze-framing) is required to catch them all.

After a string of hits, Lord and Miller’s formula is starting to show. But the jokes still work, even if we now recognize the strategy, since they’re all in service of a sincere emotional foundation. (It’s the same principle that keeps Judd Apatow and Pixar from wearing out their welcome — keep it human — and one that no machine can ever replace.) Over and over, from “Spider-Man: Into the Spider-Verse” to “The Mitchells,” their message has been, “It’s OK to be odd.” Or else, “Embrace your inner weirdo.” Such encouragement actually has credibility because the filmmakers have done just that in the telling.