‘On the Count of Three’ Review: Jerrod Carmichael’s Lively Buddy Comedy of Despair 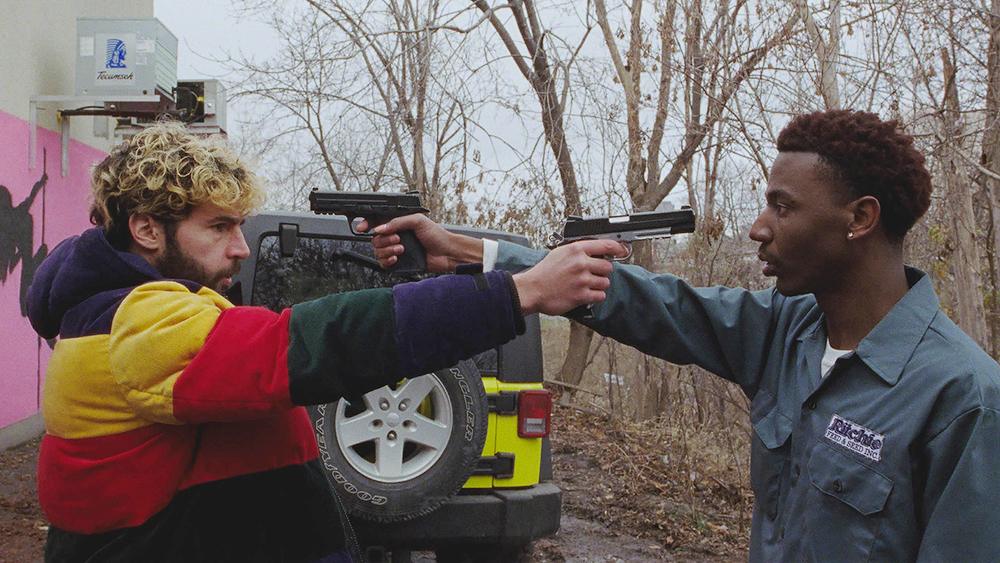 “On the Count of Three” is a trifle, but an original one: an existential buddy comedy of despair. It opens with Val (Jerrod Carmichael) and Kevin (Christopher Abbott) standing outside a strip club in the middle of the day, pointing handguns at each other in what looks like a tense Mexican standoff. But the two aren’t enemies; they’re on each other’s side. They’re trying to do each other a favor by killing each other.

The movie then flashes back to earlier that day, when it will explain why these two lifelong bros, now in their early 30s, have agreed to do themselves in. We see Val smoking in a darkened room, ignoring calls from his girlfriend, then taking guff from a co-worker when he’s on break from his shift working at a mulch plant. His failed suicide attempt in the men’s room is the one over-the-top scene in the movie, like something out of a “Harold and Maude” for the age of Middle American stagnation. The joke, of course, is that Val is inept at suicide because he doesn’t actually want to commit suicide. His job may be an easy one to mock (which the film does), but a larger point lingers: Val isn’t living, he’s just existing.

Kevin’s problems are more pronounced. We meet him in a mental ward, where he’s been placed after a suicide attempt, and during the interview with a therapist to assess if he’s got it together enough to leave, he sounds sane and centered — until he explodes into a raging tantrum about all the doctors he’s seen, all the help he’s had that didn’t do anything. Christopher Abbott, with a beard and a two-toned mop of curly hair, and sensitive eyes peering through all that foliage, suggests a short-fused Justin Timberlake. Kevin sounds like a dude who wants to get better, who wants to feel happy (who wants to feel something), but he’s chained — to his anger, to his past. Val shows up and springs him from the ward (they escape out an open window), and they become wandering comrades of screwball self-destruction.

The movie, which unfolds over a fast 85 minutes, is a scattershot one-day picaresque in which the two characters, riding around in Val’s canary-yellow Jeep, riff and vamp, chew over their lives, talk about crimes they might want to commit (and do a couple of them), and scrape the bottom of their abyss. The mutual suicide pact is a gimmick, but the movie knows it (and always leaves you feeling like it might happen). Beneath that indie hook, “On the Count of Three” creates a mood, an edge, a space to explore the personalities it’s about. It’s a violent comedy of hopelessness that channels the go-nowhere spirit of these bleak times (and I don’t just mean the pandemic), when too many people are struggling in a dead zone of no prospects.

Jerrod Carmichael, who directed the film as well as starring in it, is an actor and stand-up comedian best known for his autobiographical NBC sitcom “The Carmichael Show,” but in “On the Count of Three,” though he gets off some good lines, he has an extremely dry and explosively rational manner that’s much more dramatic than funny. (He says things like, “Thanks for hittin’ my dad over the head with a tire iron.”) His Val isn’t out to please anyone; he wears his indifference on his sleeve.

You could call him the straight man to Abbott’s comic nuthead, yet Abbott, too, delivers his laugh lines with an earnest instability. “On the Count of Three” is light but always grounded. The two characters are depressed, they’re jacked, they’re without positivity or purpose, but they’ve got each other’s backs.

The setting, in its way, us the quintessence of desolation: a snowless winter day in a nameless town in New Jersey — fast-foot restaurants, concrete bridges and stray industrial detritus, a flat weedy land stretching out under the cold winter sun. Jerrod Carmichael is working from a script by Ari Katcher and Ryan Welch, but it’s his direction that gives the movie its verve; he roots the combustible melancholia in the everyday.

Val and Kevin glide from one random encounter to the next, and most of them don’t pretend to mean a whole lot. They go to a shooting gallery, which Kevin loves (“Fuck Zoloft!”). They go to visit their old boss at the Alamo Motorcross Park, and ride dirt bikes the way they did when they were kids (it’s the one time Carmichael lets in a note of lyrical nostalgia). They rob a convenience store (on the way out, Kevin, a millennial progressive brandishing a gun, shouts at the people gawking at him, “Read your Constitution! It’s my right to bear this arm, for some reason!”). They look up Val’s father (J.B. Smoove), a mechanic who when Val was growing up was a violently abusive addict. Val looks up his pregnant girlfriend, played by Tiffany Haddish, who becomes the film’s embittered voice of reason. And in a couple of scenes that achieve a tonic suspense, they hatch a plan to murder Dr. Brenner (Henry Winkler), the child psychiatrist who ruined Kevin’s life.

In its last act, “On the Count of Three” threatens to turn into a “Thelma & Louise” of blitzed bro self-destruction. Yet the the movie pulls back from the brink — and, in fact, each time you think it’s building up a tiny head of emotional steam, it intentionally deflates. (That may be the darkest thing about it.) Pulling back from the brink is what “On the Count of Three” is about. It’s a lark of desperation that gives you a lift.