Britney Spears has been back in the news again, first because of FX’s latest installment of “The New York Times Presents,” which was entitled “Framing Britney Spears,” which made #FreeBritney trend on social media. Then, the pop star continued her legal battle to remove her father’s conservatorship over her estate. Now, she was the subject of the Feb. 20 cold open sketch on NBC’s “Saturday Night Live.”

Chloe Fineman portrayed Spears in the fictional talk show sketch, “Oops, You Did It Again,” which you can write above. Fineman started the sketch by reminding the audience that they know her from such things as “It’s Britney, bitch,” her “upbeat Instagram videos” and the word “conservatorship.” But the point of the show, she said, was to give people the chance to apologize for things they have done wrong, because since “Framing Britney Spears” premiered, she has received “hundreds” of apologies a day.

Some of those famous apologies in the real news came from Spears’ ex Justin Timberlake, as well as comedian Sarah Silverman and former blogger Perez Hilton. In the sketch, however, Aidy Bryant played Sen. Ted Cruz, Pete Davidson as Gov. Andrew Cuomo and Cecily Strong as Gina Carano for apologies that were not specific to their treatment of Spears, but rather spoke to wider controversies.

Bryant-as-Cruz was the first guest of the sketch and came out with a rolling suitcase and a piña colada, wearing a Cancun family vacation tee shirt and braids, playing off the real-life senator’s recent jaunt down to Mexico.

“I’m in a little bit of hot water, which I’m told is a thing no one in Texas has,” Bryant-as-Cruz said.

When given the chance to apologize, Bryant-as-Cruz continued, “I deeply regret my actions over the last couple of days — mostly flying United. I’m sorry, I’m pretty bad at human stuff.”

Bryant-as-Cruz also doubled down on blaming his daughters for the vacation, saying “there’s so much for kids to do” in Cancun, from “the topless beach” to “swimming with sick dolphins.”

“As someone who was often blamed for other people’s problems at a young age,” Fineman-as-Spears responded, “maybe leave your daughters out of it ’cause it could really mess with their heads.”

Davidson-as-Cuomo should have had to answer for indoor dining being back in New York, despite the COVID-19 pandemic still raging, but he was mostly there to talk about how “some of the people who died in the nursing homes were not counted as nursing home deaths.” He compared the practice to what they do at Disneyland, saying if someone dies on a ride there is no way they don’t move that body out to the parking lot.

However, even though mistakes were made Davidson-as-Cuomo would not accept being lumped in with Bryant-as-Cruz: “I am a man, you are a clown,” he said. “If you mess with me I will send you to a clown hospital and when you die I will not count your body.”

Strong-as-Carano was the lone guest who did not want to apologize. “I’m actually here for the opposite of that,” she said, noting that no one can even explain what she did wrong — so Fineman-as-Spears did.

“On Instagram you said conservatives have it as bad as people living in nazi Germany,” she said.

“I never would have made that nazi comparison if I had known everyone was going to be a nazi about it,” Strong-as-Carano replied.

She then said, “I was canceled by Disney? Disney is the moral high ground? Have you heard Briar Rabbit’s accent on the Splash Mountain ride recently?”

“Well, if you die on it, they’re going to move the body,” Davidson-as-Cuomo said.

But even Strong-as-Carano did not want to be associated with Bryant-as-Cruz: “I am strong and you are a pile of soup,” she said. “If you compare yourself to me, I will blast you to the farthest desert of Tatooine.”

“Anything to get out of Texas,” Bryant-as-Cruz said.

Fineman-as-Spears also shouted out The Notes App, a sponsor of her fictional show for being the place to go when you are “looking to post a lame apology 20 years late” and answered reader mail asking her if she was OK, to which she noted she gets the question a lot but “is not trying to send subliminal messages through my videos.” The latter point was made with wide eyes and a flash of the #FreeBritney hashtag. 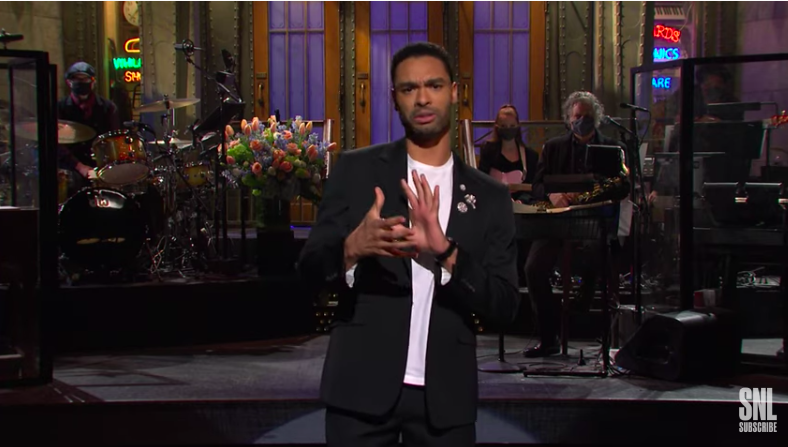 “Saturday Night Live” wasted no time commenting on the fact that everyone from critics to fans to SAG voters fell in love with Regé-Jean Page in Netflix’s “Bridgerton.”

Page hosted the Feb. 20 episode of the NBC late-night sketch comedy series and he started his monologue by pointing out that everyone knows him now from that new period drama — “the show that made everyone turn to their moms and say, ‘Never mind, I don’t think we should watch this together.’

“And because of that, people may associate me with being this smoldering, sensual smoke show,” he said in the monologue, which you can watch above. “But I assure you I’m just a regular guy.”

Of course, the comedy came from immediately proving that wasn’t true, as he slipped into a sultry voice, the music kicked up and the camera pushed in tight on his face for him to say, “I want us to have fun together, to explore each other.”

This motif continued later in the monologue when he first claimed he was nothing like his “Bridgerton” character of Duke Simon Basset: “I’m shy, emotional, it’s hard for me to talk about myself because, well, I just want to listen,” he said. He also claimed to be a nerd who loved to “sing silly little songs” before launching into a note-perfect “Unchained Melody” verse.

He was joined by “SNL” cast members Aidy Bryant, Ego Nwodim and Chloe Fineman, who was dressed as Daphne Bridgerton. The women donned British accents and claimed to be his “personal ‘SNL’ liaison.” When Page asked them their favorite parts of the show, they referred to sex scenes by referencing how many minutes into a particular episode they were.

“That’s a character. None of that is real,” he said, before sweeping an eyelash off Bryant’s face and telling her to make a wish as the music swelled.

As the monologue continued, Page pointed out he has been acting for awhile, referencing his turn in the 2016 adaptation of “Roots” and working as a high-powered lawyer on Shondaland’s previous drama, “For The People.”

“Yet, people just want me to be this guy who says, ‘I burn for you,’” he delivered to camera.

“It’s cool, we definitely have other sketch ideas where you aren’t just being an extremely hot, sex man,” said Bryant. “No, we’re screwed. Get pencils, bitches, ’cause we’re rewriting everything!”

Page also closed out his appearance on the show with the final in-studio sketch of the night being a parody of “Bridgerton,” in which Fineman donned the Daphne costume once again. He got out a simple, “I burn for you, Daphne” before Kate McKinnon called, “Cut!” to set up the next scene, which would, of course, require “nudity and simulated intercourse.”

Unfortunately their usual intimacy coordinator “had a COVID exposure,” McKinnon said, so Mikey Day came in as the replacement, along with Pete Davidson who was portraying his nephew and assistant. They were two guys who used to work in VFX but “not a lot of people getting puked on in movies because of COVID,” so they took a new gig, Day said.

Neither one of them read the script (“Seemed like girl’s stuff to me,” said Davidson, while Day understood the “gist” to be “you two are brother and sister, you’re banging each other”). They had a plastic bag of modesty garments, and when Page asked if they were clean, Davidson lifted one to his nose, took a whiff, paused, took another and said, “Yeah.”

Page and Fineman climbed on the prop bed to walk through the scene, to raucous audience cheers, but Day asked them to tap out, and he and Davidson traded places with them to offer different position and even dialogue options. One of the latter was that Daphne would tell the Duke, “Wrong hole, dumbass,” which McKinnon corrected to, “Wrong hole, your grace.”