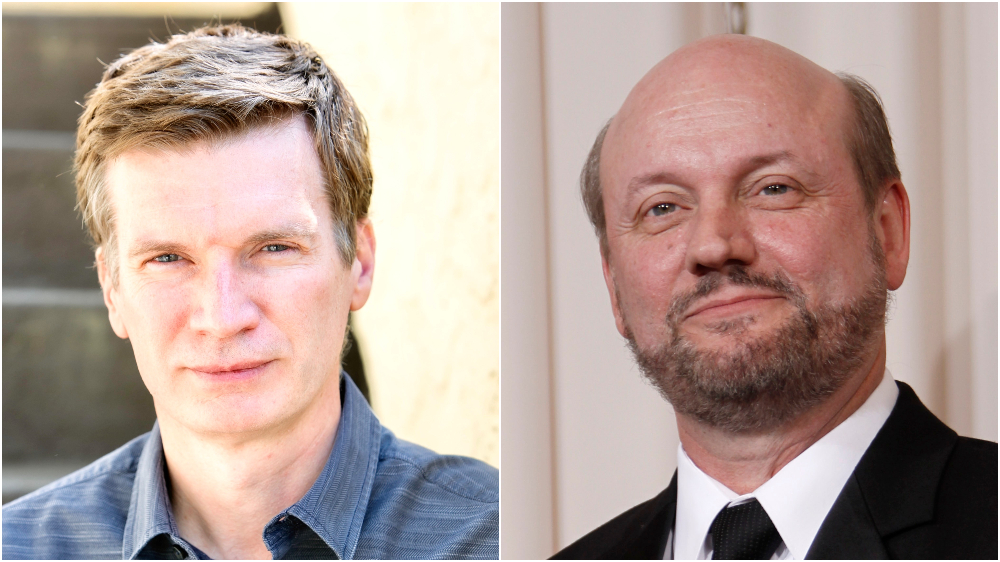 After the success of Orlando Bloom and Cara Delevingne’s fantasy show “Carnival Row,” Amazon has set its sights on another high-concept series from Legendary Television.

The streamer has issued a series order for “Lightyears,” an hourlong sci-fi-drama produced by Legendary, Variety has learned exclusively from sources.

“Lightyears” hails from Holden Miller and “The Son” writer and “Into the Badlands” producer Daniel C. Connolly (pictured left). Argentinian director Juan José Campanella (pictured right, who is best known for directing Oscar winner “The Secret In Their Eyes” and multiple episodes of AMC’s “Halt And Catch Fire”) has been tapped to helm and executive produce the first two episodes.

The series centers around Franklin and Irene York, a couple who years ago discovered a chamber buried in their backyard which inexplicably leads to a strange, deserted planet. They’ve carefully guarded their secret ever since, but when an enigmatic young man enters their lives, the Yorks’ quiet existence is quickly upended, and the mysterious chamber they thought they knew so well turns out to be much more than they could ever have imagined.

Connolly will serves as showrunner and executive producer, with Miller writing and co-exec producing.

“Holden and Dan have created an ambitious story, one that’s fantastical but filled with utterly human characters. We’re so pleased to team with Legendary on another compelling new series, and we can’t wait to see how this team brings this world to life,” said Vernon Sanders, co-head of television at Amazon Studios.

“We are thrilled to continue to grow our business with Amazon Studios,” said Nick Pepper, President of Legendary Television. “Holden and Dan have led an inspired team in crafting this wholly original, deeply emotional story and we couldn’t be more excited to bring Lightyears to audiences around the world.”

Legendary TV also has a series based on “Paper Girls,” the sci-fi graphic novels written by Brian K. Vaughan and illustrated by Cliff Chiang, in the pipeline at Amazon.

Whether it was the dystopian society of “The Handmaid’s Tale” or the alternate history of “Watchmen,” the Emmy nominated costume designers in the fantasy/sci-fi category sought to ground their looks in reality. This meant relying on historical research, such as art and photo references of specific time periods, to help transport audiences into different worlds, and to convey emotion through their designs.

Carnival Row
(Amazon)
Post-industrial Victorian England served as an influence on the clothes of Amazon’s neo-noir fairy drama. But because many characters are mythological creatures, historical styles had to mix with more mystical and magical silhouettes. “You have to present a reality in order to have to have the flip side which is the fantasy,” says costume designer and self-proclaimed history nerd Joanna Eatwell. The first step for her and her team (assistant costume designer Clare Vyse and costume supervisor Jennifer Lander) was understanding the rules, structures and boundaries before they could break them. “It’s very important to understand the period in order to portray it realistically, correctly and with confidence,” says Eatwell.

The Handmaid’s Tale
(Hulu)
Characters visited the even more oppressive new version of Washington, D.C. in the third season. The handmaids’ uniforms there included lower face masks pulled tight and secured in the back. Veils were also a part of the look of the region, and for those, costume designer Natalie Bronfman says “the original inspiration came from a painting from the 1800s, ‘La Monaca di Monza’ by Giuseppe Molteni.” Additional imagery from Christianity, Islam, Judaism and ancient Rome provided reference points for her, as well as assistant costume designer Christina Cattle and costume supervisor Helena Davis Perry. “Women have always been covered up as we have seen in the past,” says Bronfman. Similarly, when creating the uniforms for the men in D.C, the team combined uniform style elements from “First World War French [soldiers], Prussians and fascists.”

The Mandalorian
(Disney Plus)
Set three years after “Return of the Jedi,” the streaming drama had to tap into the iconography of the “Star Wars” universe, but still provide something new. Costume designer Joseph Porro worked with assistant costume designers Gigi Melton and Lauren Silvestri, as well as costume supervisor Julie Robar, on everything from the titular masked bounty hunter to mysterious villain Moff Gideon, known for his black boots and cape, to the Driver, whose fur-lined jacket evoked Boba Fett. (Disney Plus failed to make any member of the nominated team available for interviews.)

Watchmen
(HBO)
The series premiere of Damon Lindelof’s adaptation of Alan Moore and Dave Gibbons’ graphic novel of the same name begins with a re-creation of the 1921 Tulsa race massacre, which costume designer Sharen Davis wanted to “reenact perfection.” Davis looked through as much historical footage and photos as she could, with the goal of making people feel that truth emotionally through the costume design. To achieve that, she used a lot of sepia tones — matching the images of the photos she had seen and the visual way in which Lindelof wanted to bring viewers into the world. Elsewhere, the graphic novel served as her team’s (including costume supervisor Valerie Zielonka) bible, that meant leaning into red and yellow garments and the DIY feel of the masked vigilante’s alter-ego looks.

Westworld
(HBO)
Former theme park host Dolores (Evan Rachel Wood) took the real world by storm in the third season, and that meant she could finally ditch the Western garb. But still, “there’s a good old-fashioned film noir element to Dolores,” says costume designer Shay Cunliffe. Working with assistant costume supervisor Amanda Riley, associate costume designer Jo Kissack Folsom and costume supervisor Dan Bronson, Cunliffe took a minimalist approach for the season and says she was inspired by designers of the 1940s, as well as the 1980s. “The past inspired me more because it has a far more exciting future design than we have right now,” Cunliffe says. Namely, the ‘80s “had Jean-Paul Gaultier, Geoffrey Beane and Halston,” which were influential in establishing Aaron Paul’s Caleb, especially the expensive suits he tries on to blend into the world.