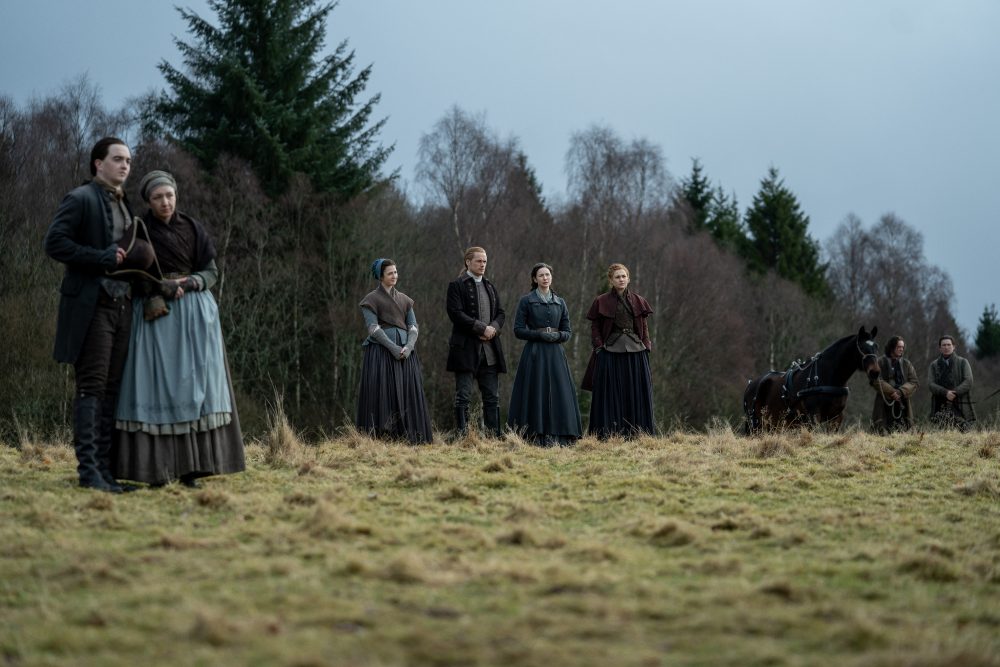 In the next new episode of Season 6 of “Outlander,” Claire (Caitriona Balfe) faints from a mysterious illness, and Variety has obtained an exclusive sneak peek.

The episode, titled “The World Turned Upside Down,” airs April 10 on Starz. It was written by Toni Graphia and directed by Justin Molotnikov. In the episode, a dysentery epidemic has spread across the Ridge. While attending a funeral for those who’ve already succumbed to the sickness, Jamie (Sam Heughan) tells Claire she doesn’t look so well herself.

“You look a bit like a ghost, Sassenach. Haven’t slept for days and hardly paused for food,” Jamie says to his wife, using his nickname for her. As the Ridge’s only medic, Claire has likely been investigating the cause of the epidemic but has come up empty-handed. Without modern medicine or protective clothing to keep her safe from infection, Claire’s efforts to help those at the Ridge is a dangerous effort. Still, that’s never stopped her in the past.

In the clip, Claire begins to feel woozy as Briana (Sophie Skelton) wonders where the Sin Eater (David Gany) is — the show’s character who eats bread off dead bodies to take their sins away —  noting no one has seen him in a while. Little does the group know, the Sin Eater is dead and Malva (Jessica Reynolds) has been visiting the dead body. In last week’s episode, the eerie daughter of Tom Christie (Mark Lewis Jones) is seen cutting off a finger from the Sin Eater’s body for a possible love charm.

As Briana speaks to her mother, Claire wavers for a moment and then collapses from a fever. Could this be dysentery or perhaps another ailment?

Watch the clip below.

“Logan” director James Mangold is helming from a script by screenwriters Jez and John-Henry Butterworth (“Edge of Tomorrow”).

The film follows an eccentric, determined team of American engineers and designers, led by automotive visionary Carroll Shelby (Damon) and his British driver, Ken Miles (Bale), who are dispatched by Henry Ford II with the mission of building from scratch an entirely new automobile with the potential to finally defeat the perennially dominant Ferrari at the 1966 Le Mans World Championship.

Balfe will portray Miles’ wife and Jupe will play their son. Chernin Entertainment is producing and Steve Asbell is overseeing for the studio.

Balfe is currently filming the fourth season of the time-travel series “Outlander,” playing Claire Randall, a married World War II nurse who finds herself transported back to the Scotland of 1743. Jupe played the son of John Krasinski and Emily Blunt’s characters in “A Quiet Place.”