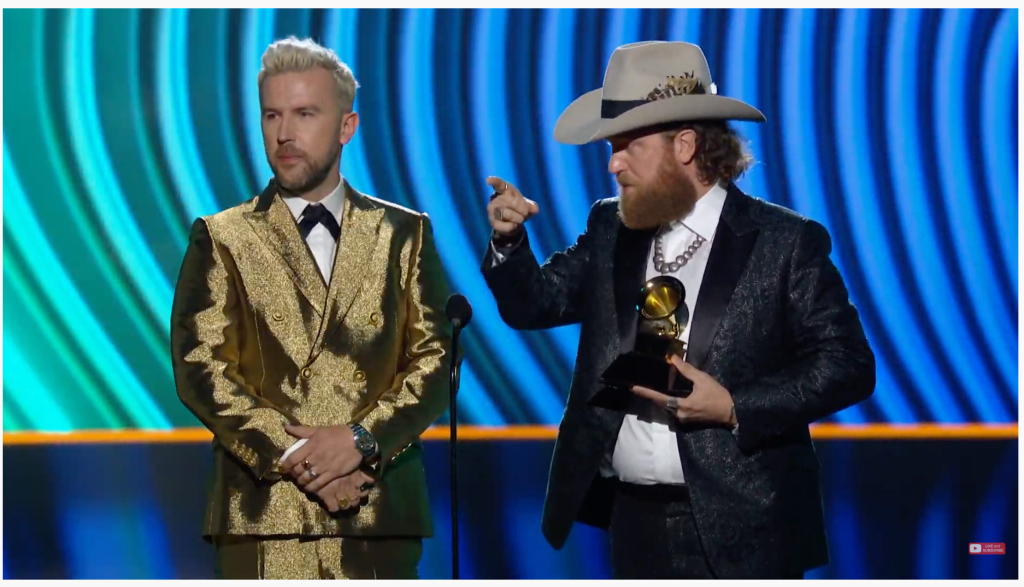 Brothers Osborne won their first Grammy Sunday for the sibling duo’s song “Younger Me,” and that wasn’t the only first — it’s the first country song with an LGBTQ+ theme to win an award in the history of the ceremony.

“For those of you who do not know, this song was written really in response to me coming out,” said singer TJ Osborne, joined at the podium at the pre-telecast premiere ceremony by his brother, guitarist John Osborne.

“And I never thought I would be able to do music professionally because of my sexuality,” TJ Osborne continued. “And I certainly never thought I would be here on this stage accepting a Grammy after having done something I felt like was going to be life-changing, potentially in a very negative way. And here I am tonight, not only accepting this Grammy award with my brother, who I love so much, but I’m here with a man that I love and who loves me back. I don’t know what I did to get so lucky.”

TJ Osborne came out as gay in February of last year.

The song, which won in the country duo/group performance category, is broader in its applications, and John also spoke to how its themes spoke to his own experience of not being able to imagine where he has ended up.

It’s not the first song with an LGBTQ+ theme to win any of the major awards; Kacey Musgraves’ “Follow Your Arrow” won song of the year at the Country Music Association Awards, but did not take the Grammy.

Although this was Brothers Osborne’s first Grammy, they’ve won five CMA Awards and six ACM Awards. The “Younger Me” video was nominated for a CMA Award for video of the year in November, and lost, but the brothers did win duo/group of the year at the same ceremony.