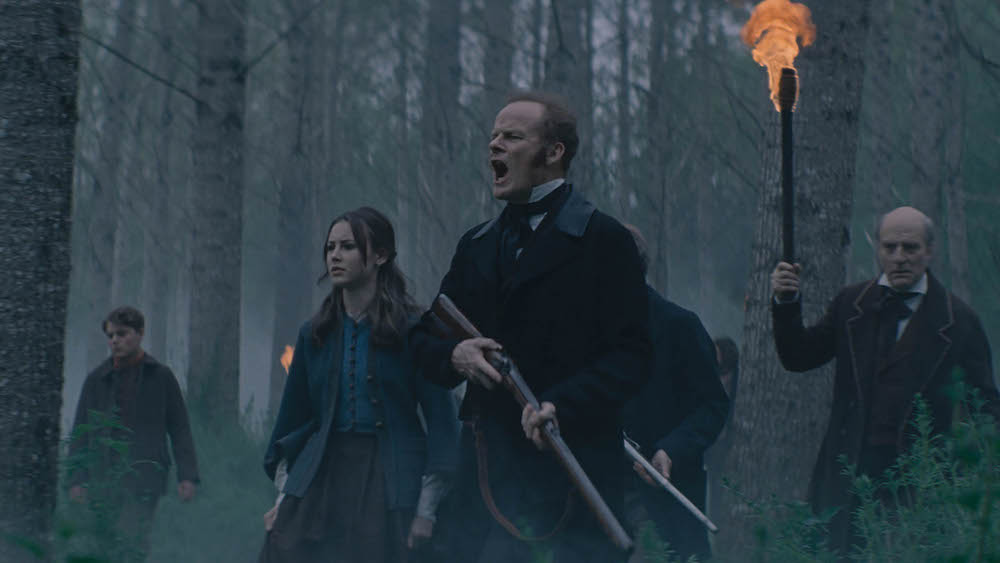 At its core, the grim, gritty and blood-soaked “Eight for Silver” is a skillfully fashioned yet philosophically thin twist on the werewolf saga. And yet, in the opening moments of Sean Ellis’ dark-hued and gory gothic horror, you might briefly mistake the monster-themed film you’re about to watch for Sam Mendes’ “1917,” with Ellis’ stylish camera cruising ahead through a crammed trench of masked French soldiers, about to be fatally hit by the mustard gas. It’s a gut-wrenching moment, made even more violent when Edward, among the attack’s bullet-wounded victims, reaches a hospital tent in the next scene, a grubby place replete with merciless buckets of amputated limbs and the screaming bodies from which they’ve been separated. Edward doesn’t survive the “Battle of the Somme,” but an unusually large silver bullet plucked from his body — “not a German bullet,” we overhear — gets sent home to France for his family to keep.

Just when you think this prologue would serve as the setup to the story penned by Ellis, the writer-director turns the clock back 35 years, all the way to the late 19th century, for yet another setup to unfold before the eventual quasi-werewolf tale arrives in that era. We find ourselves in a grand mansion somewhere in the French countryside, whose vast grounds belong to the wealthy Laurent family. Living with his wife Isabelle (Kelly Reilly) and two children, Charlotte (Amelia Crouch) and young Edward (Max Mackintosh), ruthless patriarch Seamus (Alistair Petrie) terrorizes a Roma clan with legitimate stakes on his land. When tensions peak, Seamus brutally murders the tribe in an unspeakably devastating sequence which Ellis, also handling cinematographer duties, panoramically and dexterously captures from a distance to display the extent of Seamus’ violence.

This unforgivable act brings a curse to his family, land and ultimately the town’s folk. Children have nightmares about the gypsies’ burnt bodies and being possessed by something that kills a local boy and makes Edward, bitten by a mysterious creature, vanish into thin air. When famed pathologist John McBride (Boyd Holbrook) shows up to investigate the town’s shocking happenings, perhaps too much like Richard Dreyfuss’ character in “Jaws,” the film finally gets going in earnest. At this point, we’re already past the half-hour mark, but barely getting started.

A lengthy setup isn’t necessarily a bad thing. A lot of movies move a bit too speedily these days, leaving little room for the kind of character development that allows audiences to invest in the lives of the individuals they’d be following. What’s puzzling about “Eight for Silver,” however, is that even with a luxuriously massaged entry into the world of the Laurents, Ellis falls short of providing enough reasons to care about their troubles or villainy. Horror is most effective when the graphic scares are matched with an emotional dimension, something at which Ellis aims but doesn’t quite arrive — a shortcoming that also undersells the marvels of his first-rate ensemble cast.

Part of the problem is a lack of thematic direction for this take on the werewolf legend. The filmmaker says “Eight for Silver” was his way to re-imagine and sidestep the tropes of the genre routinely lifted from George Waggner’s “The Wolf Man,” a Universal Classic Monsters original written by Curt Siodmak with a subtext about his Jewish identity. Perhaps Ellis’ distant offshoot can be read as a story of class struggles in basic terms, with fiercely anti-capitalistic leanings to boot. But the writer doesn’t examine this intriguing and timely avenue deeply enough, leaving us with something vaguely spiritual, handsomely made but hardly soul-scarring.

Still, “Eight for Silver” is gorgeously crafted end to end, with sharp, well-paced editing and aptly icy cinematography that finds horror everywhere it lurks, even on an ordinary kitchen counter with a dead rabbit waiting to be cooked. An elegant DP when he doesn’t lean heavily on jump scares, Ellis captures the moody woods of muted greens and grayish blues, as well as the intimately candlelit, chiaroscuro indoors with a sinister edge, visually placing his film somewhere in the spine-tingling vicinity of “The Conjuring” universe and Robert Eggers’ “The Witch.” Also a fashion photographer, Ellis substantiates his tasteful eye for clothes, giving Madeline Fontaine’s restrained yet impeccable gothic costumes their head-to-toe moments to shine, with the backdrop of Pascal Le Guellec’s richly intricate production design.

Like he did with his nail-biter of a social thriller “Metro Manila,” Ellis stages his chaotic battle scenes with razor-sharp clarity, save for an unusually blurry one toward the end. Completely avoiding clichéd werewolf transformation scenes, the filmmaker also manages to make his monster distinct. In “Eight for Silver,” the beast is envisioned like a xenomorphic larva straight out of “Alien,” one that imprisons its howling and screaming victim into its sticky slime in a design of strange, grotesque beauty. If only the film on the whole had as cavernous a bite as any one of its frightening brutes.