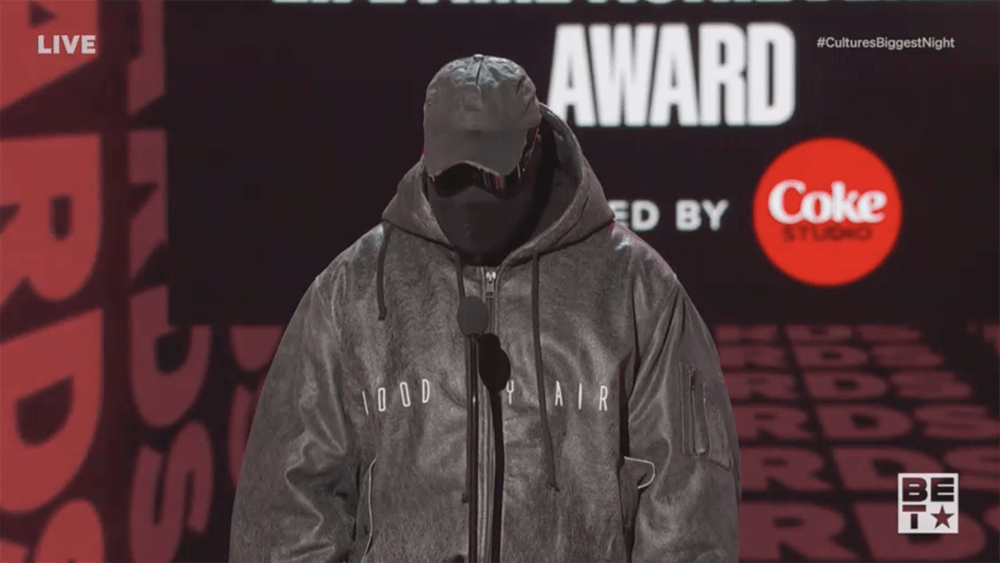 Kanye West made a surprise appearance some three hours into the BET Awards on Sunday night to pay tribute to Sean “Diddy” Combs, the show’s recipient of the Lifetime Achievement award.

His speech followed an elaborate performance that spanned Combs’ entire career, featuring cameos by Mary J. Blige, Jodeci, Nas, Lil’ Kim, Busta Rhymes, the Lox, Bryson Tiller, Faith Evans, the Maverick City Choir — and Diddy himself, who dedicated the first half of his hit 1997 “I’ll Be Missing You,” to his longtime partner, actress Kim Porter, who died of a lung infection in 2018, via video footage that played while he performed; the second half of the song featured a video tribute to its original subject, Notorious B.I.G. Next came a powerful video speech from Jay-Z and an amusing one from Babyface — who recalled Diddy haltingly but successfully teaching himself to ski.

Then, West took the stage, wearing a grey leather Hood by Air jacket, a matching baseball cap, shades and a full black-stocking facial mask, similar to ones he wore in appearances and performances last year.

In his speech, West identified with the desire to change one’s name: Over the years, Combs has called himself Puff Daddy, P. Diddy, just Diddy and most recently, simply Love; last year West legally changed his name to “Ye.” He also spoke movingly of Combs’ influence on him, stressing that he considers him an artist — and it is easy the influence of Combs viewing his entire creative and business output as part of a whole.

“How do we crown our kings? How do we appreciate our kings?,” he began. “To think how far we could just make if off of inspiration, to hear the way somebody chopped a sample in. Me and [friend] rushin’ to see who could get the Bad Boy mixtape and play back the original version of “Benjamins,” over and over, thinkin’ I was one of the Hit Men.

“I was signed to Puff without him knowing,” he laughed, adding “That statement is not legally binding!”

“To go to New York,” he continued. “And think that everybody had on leather jackets and new Tims every day…

“To see Puff in real life at the ‘Missing You’ video, just like me tapping free like a little kid — I just need to meet this man. This is my favorite artist. You see I’m saying favorite artist — everything, not specifically production, the trip. Back then there was so many rules to hip-hop and he broke all of them.

And here we are, y’all don’t understand, getting snuck into the club at 17 years old in Chicago, thinking we was part of Bad Boy.

This man was so famous, it was just good enough for me to be Chicago’s version of Puff. You know, I took a little hiatus. I said ‘I wanted to declare myself legally dead for a year.’ Nobody missing me. You know, I just want to be off the grid.

“Puff is pretty persistent. But I had to think. It’s like people, they get amnesia, like I should never have to call more than one time.

“Any of us in this room, if Puff ever need us, we need to jump and be there. This man has been through and survived a lot of stuff. Broke down a lot of doors so we could be standing. I know for me, that I could be here today.

He broke down so many doors of classism, taste, culture, swag. Puff, if I never told you, I love you. You’re my brother.

“I was at the dentist and I was taking nitrous oxide. I wouldn’t suggest it if anybody is stressed out. And I thought I know how it is to want to change your name. You might know him as Diddy, Puff Daddy, Sean Combs. But when it’s hitting a certain point, I thought at the end of it, all is love — all of it. All we have is love. In Jesus’ name, bring out Love.