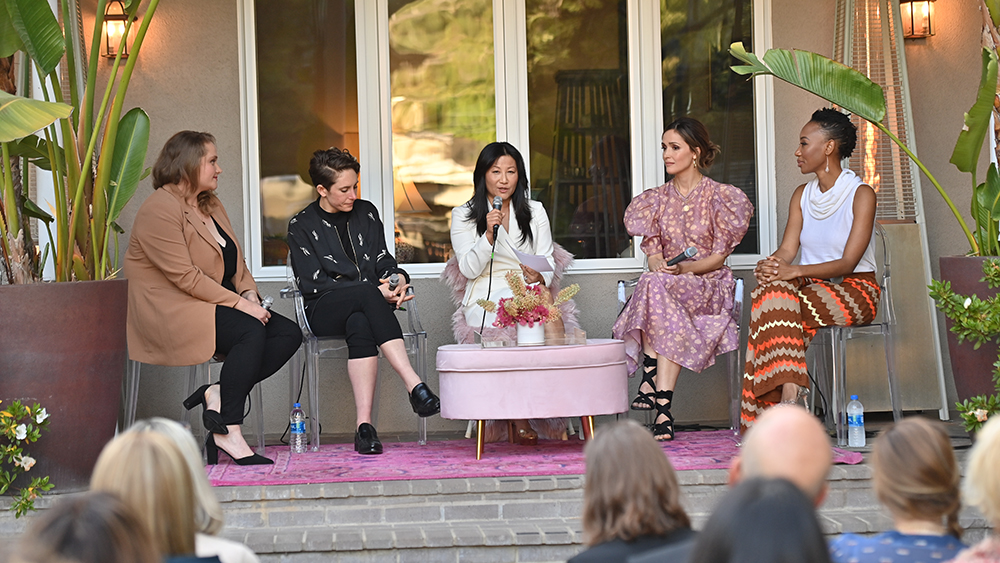 The Australian Consulate-General of Los Angeles celebrated Australian women’s success in film and television on Thursday with a panel and networking reception featuring vetted and rising Aussie talent. The event, held in partnership with Variety, spotlighted the increase in international production in Australia and the historic number of Australian women who have been recognized by international award bodies for their contributions to the industry.

Diverse representation in film, pushing boundaries on and off set, and becoming one’s own agent of change were featured topics during a panel held at the official residence of Consul General Jane Duke in Brentwood. Director Unjoo Moon (“I Am Woman”) served as moderator with the panel featuring actor and producer Rose Byrne (“Physical”), actors Charmaine Bingwa (“The Good Fight”) and Danielle Macdonald (“Dumplin’”), as well as cinematographer Ari Wegner (“The Power of the Dog”).

Moon began the conversation by asking Byrne how the increase in screen production in Australia along with interest in digital entertainment and streaming services have affected her decisions as an actor and producer, and how women can take advantage of this shifting landscape.

Byrne, who besides her acting accolades also founded the all-female collective Dollhouse Pictures that prioritizes female-driven storytelling, noted how the company’s debut feature film “Seriously Red” will have its world premiere at SXSW festival after filming in Australia amid the pandemic.

“It was interesting during COVID. I’ve been trying to get this film made for over 10 years as a producer. During COVID, we finally found this window, weirdly, and it was shooting in Australia in the Northern Rivers area. At that point, Australia had zero coronavirus cases. It was one of the few places in the world that we could go and shoot without thousands and thousands of restrictions.” The actor and producer added that, as many creatives have likely felt while shooting over the past two years, for indie films “all the stars have to line up to actually get it made.”

The actror also detailed how all genres should be open for women, adding that when she starred in “Bridesmaids,” she was surprised to hear people realizing women could pull off a comedic hit. “They were like, we can’t believe this is so funny. And it’s a bunch of women. I was like, ‘what? We’re not dolphins. What are they talking about?’ It didn’t even occur to me, but this was a part of the conversation then. I’m slowly hoping that’s not going to be part of the conversation one day, to think women aren’t capable of doing everything.”

Bingwa, who stars in the CBS drama “The Good Fight,” spoke on ways the industry can expand opportunities for women especially those in underrepresented groups or those who don’t identify as heteronormative.

“I think in terms of representation on screen, actors are just one link in the inclusion chain. We need directors and producers to select those people. We need financiers to see value in us. We need stories written by the underrepresented or written about them,” Bingwa said. “Even things from a grassroots level. I recall coming to L.A. and almost every acting class I was in, I was the only Black person in there.”

Bingwa shared advice for underrepresented groups in the industry, which is “try and hunt down where great is.” For her, it’s been starring in the spin-off and standalone sequel to “The Good Wife” that focuses on a prestigious African American–owned law firm.

“I am fortunate right now to be on a show that I think is like best in class in terms of inclusion,” Bingwa said. “All through the cast and crew, females, people of color, people of different sexual orientations, it’s a really wonderful place to work. I find that it’s really normalized it for me. So I’ve internalized those values and take it to every other project that I’m part of as well. I think if we all do that, we’ll all be advocating for everyone.”

“It’s really fun to get roles where how you look isn’t even a part of the conversation. It’s just anyone could have played this role and you are the person that got chosen. But it is also important to do films where you do address issues because people want to feel represented,” Macdonald said.

She noted that participating and supporting projects on issues such as body positivity not only allow for increased representation on-screen but also increased conversation about such issues in society.

“‘Dumplin’’ was something that my 16-year-old self found very cathartic to do,” she said. “Once the movie came out, the amount of people that came up to me. I would have people crying sometimes and I didn’t realize how many people wanted to talk about this or see this because it wasn’t really shown that much or talked about.”

Wegner, who is only the second woman in Oscar history to be nominated for cinematography for her work on “The Power of the Dog,” discussed how her home country has defined her work ethic as well as offered opportunities that may not have been afforded elsewhere.

The Oscar nominee noted appreciation for growing up in a “multicultural” city such as Melbourne and being surrounded by Australians who she feels are “well-traveled as a culture.” Looking back on her career, Wegner said there is a useful intimacy when networking in Australia.

“Coming up in a place where you’re in a small population in the niche industry in one particular field, I think it’s a great place to train and grow because you have such direct access to the people that are above you. You can be really quickly meeting amazing mentors and seeing the kind of things it would take you decades maybe in another place to get to see,” Wegner said.

Speaking to the Intl. Women’s Day campaign theme for this year, “Break the Bias,” panelists offered insight on ways women can be their own agents of change.

Macdonald, who noted hating confrontation while working in the industry, shared she now advocates “for myself the same way I would for someone that I love.” For Wegner, she offered a positive mindset that all women in the industry should take on, which is “you have no less chance than anyone else.”

Bingwa encouraged women to trust themselves no matter the scenario, sharing an experience in which she asked if she could rewrite a scene. “I was honestly paralyzed at the moment. It was overwhelming, but what was greater than the paralysis was the responsibility I felt I had to tell this Black female story in a way that was genuine and did justice to us.” The actress added that despite fears of what may happen, “Trust your voice. Your instincts are usually telling you something and you can make a lasting contribution.”

Variety co-editor-in-chief Cynthia Littleton gave closing remarks for the event, noting how the past decade has been a “truly thrilling” time to cover the industry due to there being a shift from a Hollywood-centric business to the “emergence of a true global market.”

Indeed, the celebration of Aussie talent comes as international production is booming on the continent thanks to talent on and off-screen as well as governmental support, such as a location incentive program that launched in 2018. Creative productions taking place on the continent since the program launched include “Elvis,” “Shang-Chi and the Legend of the Ten Rings” and “Thor: Love and Thunder.”

Littleton continued by acknowledging the dedication Australian creatives bring to their craft. “You are fun. You are collaborative. You are absolutely hardworking,” she said to hefty applause from the audience. “When you look at the influence of Australians in media, you do absolutely punch above your weight. It’s really fascinating to see companies like Viacom, CBS and Comcast all start to pour investment into this super rich territory, which is teeming with talent. This is unprecedented in volume in the erasure of geographic borders with these gigantic streamers. I think we have only scratched the surface of how profoundly the business is changing. Consumer behavior is changing. And so moments like this, where we stop and talk and take stock of a market or a region, are really wonderful.”