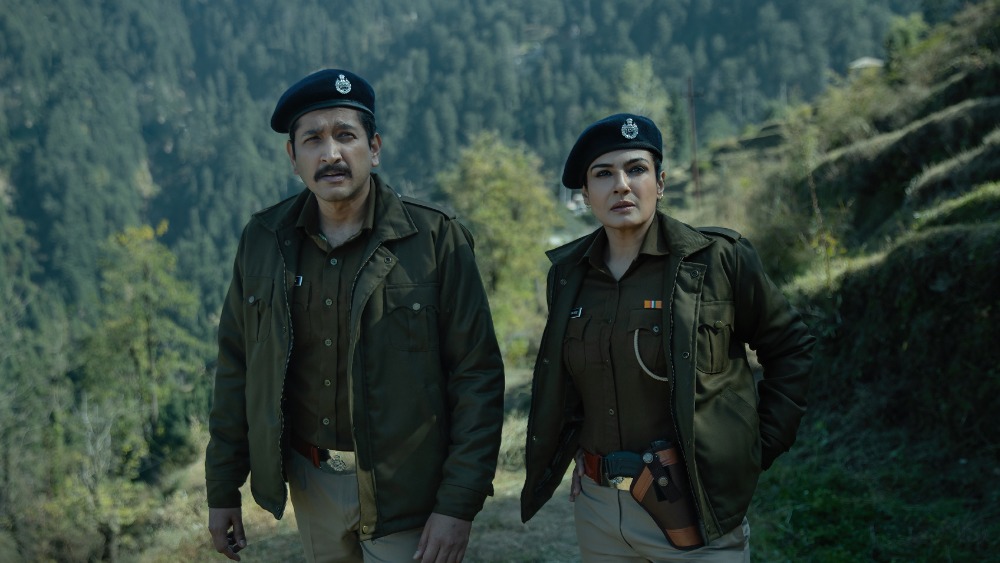 “Aranyak,” the Indian noir series that began streaming Dec. 10, has emerged as a global hit for Netflix. It bowed at No. 1 in India and Bangladesh and is in the top 10 in 13 countries, including Bahrain, U.A.E., Singapore and New Zealand.

The contemporary series is set in the fictitious forest-surrounded town of Sirona in the Himalayan foothills. The protagonists are Kasturi Dogra, a police officer, wife and mother who is planning to take a year’s leave of absence in order to devote more time to her family and her marriage, which is on the rocks; her replacement, Angad Malik, who has painful baggage from his past; and her father-in-law Mahadev Dogra, a retired member of the Sirona police force.

In keeping with the tropes of Scandinavian noir, in “Aranyak,” a young French tourist goes missing in Sirona. The clue to her whereabouts maybe a supernatural figure known by the locals as ‘man-leopard.’ But it could also be rival politicians or some of the town’s youngsters or tradespeople, all of whom have multiple skeletons in their cupboards.

However, the similarities to Scandinavian noir end there. “Aranyak” (which translates to English as ‘the forest’) is deeply rooted in Indian culture and tradition. The series is created by Charudutt Acharya, a Film and Television Institute of India direction graduate, who also holds a masters degree in feature film screenwriting from Royal Holloway, University of London. Acharya’s writing credits include Sony TV’s dramatized crime series “Crime Patrol” and SonyLIV crime drama series “Project 9191.”

Acharya got the idea for a series based around a policewoman when on vacation in the Himalayan foothill state of Himachal Pradesh. The writer and and his wife were victims of a petty crime, went to report it at a quaint police station and came across a woman who was the mother of a teenage girl, wife and police officer and was managing all three functions simultaneously and effortlessly. Acharya, who had been toying with the idea of a series based on one of the real life cases he came across on “Crime Patrol,” combined it with another thought about a creature-based story and the policewoman character.

“While it is a crime thriller and a whodunit and has a bit of a mythological involvement, I was very drawn to the fact that the characters and world we create should be rooted in our ethos,” Acharya told Variety, adding that a lot of his writing is based on his personal experiences and what he grew up with.

“If you do it correctly, then it does become universal,” said Acharya, who is represented internationally by London-based Blake Friedmann Literary Agency and in India by Collective Artists Network. “We did not make it so subculture specific that somebody might not get it.”

Acharya took his idea to Rohan Sippy, for whom he’d previously written “Dum Maaro Dum” (2011) and “Nautanki Saala” (2013), an adaptation of 2003 French comedy film “Après Vous,” and who had produced Acharya’s directorial debut “Sonali Cable” (2014). “That balance between the personal drama, plot and the thriller element of the whodunit plays out really nicely in this format,” Sippy told Variety.

Sippy and Acharya developed the idea and took it to prolific producer Siddharth Roy Kapur who warmed to it instantly and a Netflix commission followed.

“What really drew me to was it was so uniquely Indian, it felt authentic. It felt local, while still maybe harkening to that Nordic noir space, but it also wasn’t derivative,” Roy Kapur told Variety.

“Aranyak” is produced by Roy Kapur Films and Ramesh Sippy Entertainment, with Rohan Sippy serving as showrunner. Vinay Waikul, whose credits include ALTBalaji series “The Test Case” (2018) and “Mission Over Mars” (2019), was brought in to direct. Raveena Tandon, one of the biggest Bollywood stars of the 1990s and best actress winner at India’s National Film Awards for “Daman” (2000), was cast as Kasturi Dogra.

“Kasturi’s character is what drew me in – she is such a fierce, aspirational lady,” Tandon told Variety. “It was my intention to play a woman in uniform someday as I have tremendous respect for them. The way they juggle their personal and professional lives, the sacrifices they make for their families and their country, and all with a smile on their face.”

Parambrata Chattopadhyay, star of both Bengali-language cinema (“Abhijaan”) and Bollywood (“Kahaani”), was cast as Angad Malik. “I truly felt that it was a very taut and atmospheric thriller, where I was getting to play a very nuanced character,” Chattopadhyay tells Variety.

The plan was to shoot in Manali and Dalhousie from May 2020, but India was in the throes of the first wave of the pandemic and all the development work was forced online.

“There are two or three ways of workshopping, one can be a very psychoanalytic approach, which I had done with some other films, which really helps,” says Chattopadhyay. “But with this one, what we did was we kept reading and reading and reading time and again, and with every single read, newer dimensions, new nuances, came out and finally we could just nail those nuances and emboss them upon ourselves.”

The shoot was delayed till October 2020 and was completed before the next wave struck. Sippy recalls the strict social distancing measures that ruled out post-work socializing, while Roy Kapur says that the abundant precautions the production took meant that the shoot wasn’t disrupted by COVID-19 at all. Waikul says that he stayed true to the written material which, “inspired us to create visuals for the story.”

“Aranyak” captures the ethos of small town India and the menace of the forest with the majestic Himalayas as the backdrop. It is a win for Netflix in that within India, where it has slashed subscription rates, it has appealed to a broad audience spectrum, one of the streamer’s goals.

“In our conversations with Netflix, the idea was to have as wide an audience as possible watch it,” says Roy Kapur. “The intention at every point was to see how much we could broaden the scope of the audience and not be intimidated in any way with the style of storytelling, or with the manner in which things unfolded. So it is one of those unique pieces of material that appeals to so-called class audience as well as a mass audience.”

Tanya Bami, series head, Netflix India said: “We are so heartened and excited to see our members loving the complex characters in ‘Aranyak.’ And there’s a lot to love – a tight plot written by Charudutt Acharya which Vinay Waikul brought to life with his vision and Raveena, Parambrata, Ashutosh, Meghna and Zakir brought in their best to the characters.”

The creative team behind “Aranyak” remain tight-lipped about a second season.