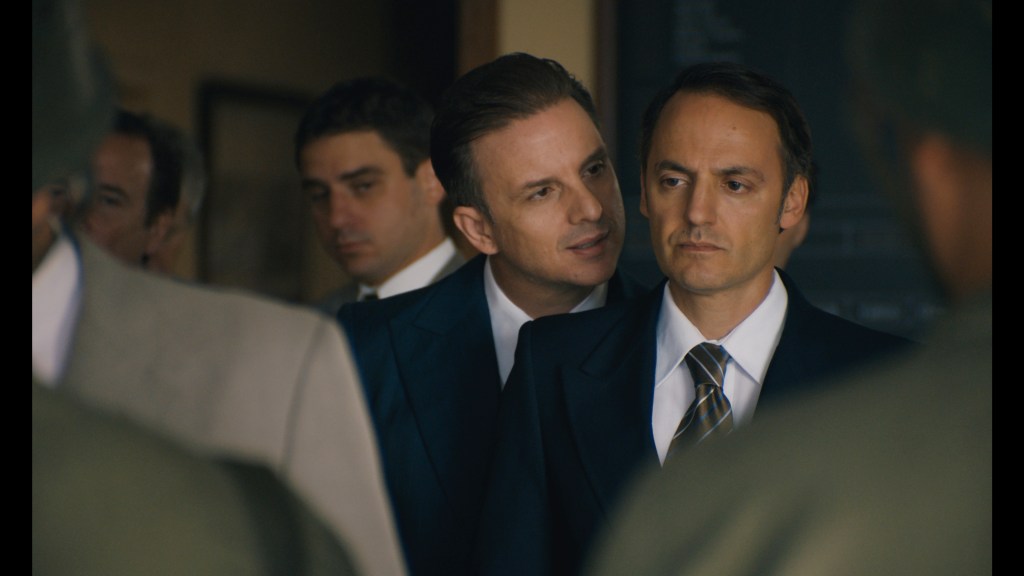 The first thing one notices about “Azor” is how real it feels: the entitlement, the encyclopedic knowledge of “good” families, the multilingual fluency, the bonhomie of power. The main characters are a Swiss private banker and his wife, and it comes as no surprise to learn that director Andreas Fontana is himself the grandson of a Swiss private banker – he knows this milieu very well, and how those inside look at the world. It’s because every line uttered, every glance and body gesture, is so right that Fontana can take such a hermetic bubble, connect it with Argentina in 1980 when the military junta was flexing its murderous muscle, and turn it into a supremely confident debut. Even if this environment will be foreign to most viewers, “Azor” builds the mystery with such engrossing cleverness that the film should easily attract art-house audiences.

Private banker Yvan De Wiel (Fabrizio Rongione) arrives in Buenos Aires from Geneva with his ever-poised wife Ines (Stéphanie Cléau). It’s 1980, when the junta’s grip is being felt across all classes and the number of disappeared persons is only whispered about. The couple have arrived to reassure wealthy clients that the disappearance of Yvan’s colleague René Keys won’t impact their accustomed client privileges; they’re also curious to understand what happened to Keys.

Yvan is the perfect private banker – undemonstratively charming and discreet with the words that come out of his mouth and those that enter his ears. He and Ines carefully select each item of their clothing, calculating the impact of a double-breasted jacket versus a sober-colored suit, always attuned to the client’s aura. Private banking isn’t like the commercial variety that’s making inroads with the new strongmen in the guise of a Credit Suisse representative; private is another world. They’re refined gentlemen projecting the same class level as their clientele, with similar diversions, mixing in the same circles. Keys was different from Yvan, more openly passionate, more demonstrably engaged, which created a sense of camaraderie with some but may also have led to an act of political indiscretion.

When the De Wiels have their first meetings, they know they’re being tested just as they’re testing the people they speak with. They adapt themselves to the boorish lawyer Dekerman (Juan Pablo Gerreto), whose boss Aníbal Farrell (Ignacio Vila) may withdraw his funds, though they’re more at ease with the Lacrosteguys, an older couple accustomed to their superior place in the world but now nervously concerned that the aristocracy won’t be unquestioningly protected by the junta. For people like Mrs. Lacrosteguy (Carmen Iriondo, superb), hauteur isn’t needed within one’s set, which includes the De Wiels, but in these uncertain times, when even the children of the elite are disappearing, graciousness must be balanced with caution.

Yvan’s meetings gradually bring him into the circle of the strongmen in power, such as Monsignor Tatosky (Pablo Torre Nilson, chilling), who explains that parasites must be eradicated, including in the best families. Earlier, Ines scolded her husband privately: “Your father was right. Fear makes you mediocre.” It’s a Lady Macbeth line, and in some ways that’s Ines’ role; razor-sharp in sizing up every situation, each detail of a person, she’s too much invested in maintaining the couple’s position of superiority to ever allow her husband to risk it, which makes her coolheaded advice and refined diplomatic skills especially crucial in this situation. In truth she knows her husband isn’t mediocre; he just needs a little push when the prize requires some moral soiling.

Fontana is clearly thinking of “Heart of Darkness” in how he builds the mystery of Keys’ personality as well as his disappearance, but then he bifurcates the troubled journey so that Yvan is literally on a river in a jungle, heading toward a very dark heart indeed. In line with everything else in the film, the ending is discreet and correct on the surface, but underneath lies an evil that can barely be spoken. That cool surface veneer is underlined by the largely cut-and-dried camera setups at the start, with their shot-countershot formalism first broken when Yvan surreptitiously goes to Keys’ secret apartment. Like the intelligent performances — both Rongione and Cléau are standouts — and the terrific art direction, the film’s design reinforces an exquisite, levelheaded decorum about to be smashed by a chillingly cruel monster.