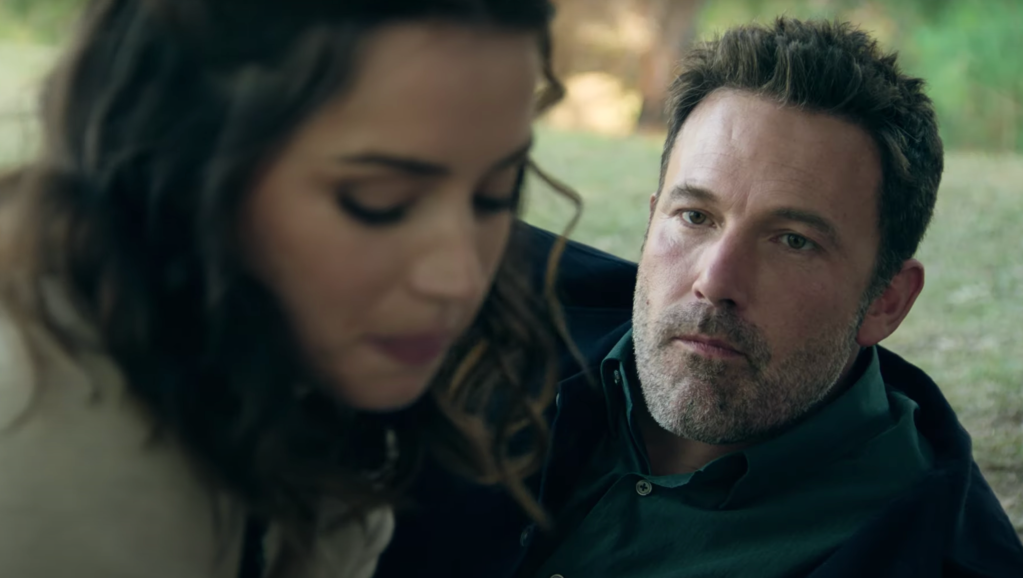 Hulu’s buzzy new erotic thriller “Deep Water” debuted on March 18 and has been trending on Twitter ever since, thanks to a bizarre plot that feels like chunks were left on the cutting room floor, as well as the sultry performances of one-time real-life couple Ben Affleck and Ana de Armas. But what makes this movie special are the bizarrely specific choices made along the way, from jaw-dropping lapses in judgement to a singular obsession with snails. Variety has cobbled together some burning questions from some of the film’s most outrageous moments, along with helpful timestamps so we can unravel these mysteries together.

1:25 — We meet Vic Van Allen (Ben Affleck) after he’s taken a long bike ride. But when he removes his shoes, there are no socks to be found. Gross! Why?

6:07 — Vic and his wife Melinda (Ana de Armas) clearly have a sexy marriage arrangement, as she’s meeting a guy at this party for a date. But what is their arrangement and how did it come about? The neighbors seem equally confused, as they’re concerned for Vic, but Melinda also appears to be the life of the party.

10:13 — Melinda leads a singalong of the Italian song “Via Con Me” by Paolo Conte. How does the whole crowd know all the lyrics? Did they practice ahead of time?

15:43 — While intoxicated on the way home from the party, Melinda starts chowing down on an apple. Has any drunk person ever noshed on an apple to sober up? Were disco fries not an option?

18:42 — Why is Vic and Melinda’s child Trixie (Grace Jenkins) casually making a potato-based science experiment during breakfast? We know she’s smart and Vic’s a computer whiz, but this is some NASA-level tinkering.

20:45 — Vic’s “joke” from the party about murdering someone has already been discussed amongst the whole town by the next morning. Are they all on a group text thread?

21:45 — While fighting with Vic with a mouthful of toothpaste, Melinda spits a bunch of foam on his button-up. Is that to belittle him or was she just multitasking?

24:56 — If your wife is a picky eater, why make lobster bisque in the first place?

30:12 — Whatever happened to Joel Dash (Brendan C. Miller), an early object of Melinda’s desire? Is he still in an Uber on the way to New Mexico?

30:20 — These families are throwing extravagant parties all of the time! Do I need to find a new friend group to live this lavishly?

35:33 — Was Melinda’s subtle gesture of pulling a pubic hair out of her mouth scripted or improv? Because either way it was a choice!

35:47 — Not to nitpick spur-of-the-moment dirty talk, but is Melinda regularly whispering “Would you kiss my ass?” to Vic? Or is this a metaphor?

36:17 — One of the soccer players’ shirts says “Coach.” Is she both a coach and a player? If so, that seems like a clear conflict of interest.

36:54 — Why did Melinda give sexy piano teacher Charlie De Lisle (Jacob Elordi) a check for $3,000? Was it legitimately for piano lessons? If so, why did he let her tab get up so high? If not, is this implying she’s paying him for sex? He’s a handsome man, sure, but is this a universe in which a woman who looks like Ana de Armas has to pay for sex?

49:28 — Another party, but with a new mystery: What is this drinking game they’re playing on the lawn? I googled “lawn crawling game with tumblers on your back” and was left with more questions than answers.

52:02 — When Melinda teases Vic by grabbing his crotch at the party, isn’t she worried that other people will see and they’ll stop getting invited to parties? This event is not that crowded and their social calendar is at risk!

53:00 — How long is this party? It’s gone from early afternoon into night…is this an adult sleepover? This movie is always one step away from the neighbors announcing that everyone in town is a swinger.

55:44 — Why is everyone in the pool so freaked out by the rain? They’re already wet!

56:24 — How high is Grant (Lil Rel Howery) if he thought he was hallucinating rain?

1:03:40 — Maybe I’m not chivalrous enough, but if my wife accuses me of murder to the police, why would I drive her home?

1:08:45 — What drives Vic’s snail fascination? Sure, he retired young, but he’s an avid mountain biker, AND runs an indie magazine AND has a snail greenhouse? They later serve for two metaphors and one plot point, but it seems like there’s something we don’t yet understand about his obsession.

1:14:07 — Don and Kelly Wilson (Tracy Letts and Kristen Connolly) tell their daughter Goldie to go inside during a tense dinner five separate times within one minute. Why doesn’t she ever leave?!?

1:22:04 — It’s presumptuous of Tony Cameron (Finn Wittrock) to pester Vic about eating his snails for dinner. Escargot has its fans, but how many people go to a home and demand to cook up and serve the pets?

1:26:45 — When Vic slams on the brakes in his Jeep, he and Tony fly forward and almost hit the dashboard. Yet Vic’s tiny, unbelted dog is seated in the backseat. How did he avoid flying into the front console?

1:29:28 — Although Vic sunk Tony’s body to the bottom of the water with rocks, it was surrounded by shallower areas. Did he not think to take him out deeper, versus where the bloated body would inevitably appear?

1:33:36 — Early on, Vic mentioned that he published a magazine of poetry and photography. But aren’t “Xenophon” readers going to be a bit frustrated that the latest issue is just a vanity project dedicated to his wife?

1:36:09 — Later, Vic is seen reading that same issue of “Xenophon.” Did he not get his fill of it while putting it together, or is he so proud of his work that he’s been staring at it all day?

1:42:51 — Why did Don unlock his car several times in a row but is still unable to get in? Did he hit the wrong button?

1:44:23 — Sure, Don wants to brag to his wife that he was right about Vic. But clearly he’s not the most coordinated person who has ever tried texting and driving. Maybe wait until you get service on the main road to call and then gloat?

1:45:52 — Was the whimper Don makes as his car flew off a cliff because he realized the last words he’d ever speak are the somewhat embarrassing “Goddam fucking autocorrect! God damn it!”?

1:47: 53 — Even though she was just packing to run away from Vic, Melinda’s now burning evidence of his crimes. Why did she do a complete 180? Was she that sad that Trixie threw her luggage into the pool?

1:48:32 — Much of the end credits consist of an extended version of Trixie singing along to Leo Sayer’s “You Make Me Feel Like Dancing” in the back seat of the family car, as she did in an earlier scene. Is this the character noting that things are going to be alright? Or did director Adrian Lyne decide it was too adorable to end up on the cutting room floor?

1:54:45 — In one of the strangest easter eggs imaginable, the credits end with a reprise of the version of “Old MacDonald Had a Farm” that Melinda screamed about in the film’s opening scenes. Has Melinda finally come around to the song? Is this the Amazon Echo’s revenge after being shut down so unceremoniously earlier in the film? THIS is the question that will keep fans up at night. 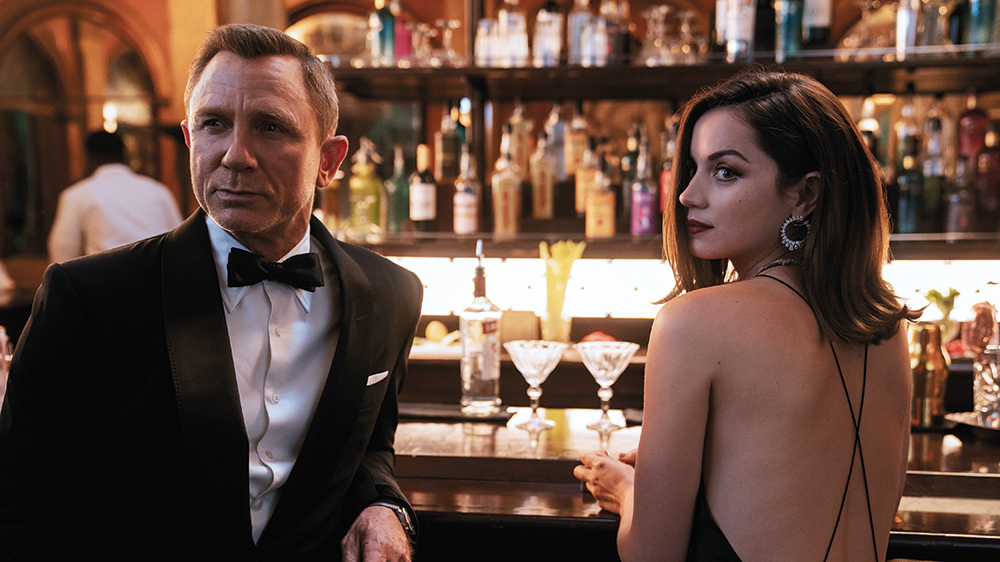 When Cary Joji Fukunaga offered Ana de Armas a part in the James Bond film “No Time to Die” she was, naturally, excited. But she was also hesitant.
“I loved working with Daniel Craig on ‘Knives Out’ and I wanted to work with Cary and even a tiny part in a James Bond film will make you known globally,” says the Cuban-born actress. “All of those were magnets to me.”

But the part had not been written yet and de Armas didn’t want to play just the latest in a long line of sexy Bond girls. “Times have changes and the women in Bond films need to be different,” she says.

Sure, she has taken roles she didn’t want as a steppingstone in the past. “You do the best you can with the part you have,” she says, but she’d reached a point where her resume and confidence allowed her to be pickier and more protective. “At the end of the day it’s so much work and if it’s not something you really want to do you’ll be miserable. So I told Cary I would not just say yes because this is Bond and I kind of pressured him to write something to show me.”

Ultimately, the character of Paloma, “a bubbly, beautiful unexpected thing,” was strong and self-sufficient, a peer to Bond in both charisma and gunplay — someone de Armas, and audiences, found irresistible. (“She’s also Cuban, which is probably one of my strengths,” de Armas says with a laugh.)

Now that she had a part she liked, de Armas began to feel “really, really nervous.” Sure, she’d worked with Craig, “so I was ahead of all the uncomfortable moments of getting to know each other” and she had been in a blockbuster like “Blade Runner 2049” but she knew that “James Bond is another level. I knew that I didn’t know what I was getting myself into,” de Armas says, adding with a laugh that she was glad to have a limited amount of screen time. “It felt like a good amount for me to step into this world.”

De Armas knew that Craig was a generous actor and that they had good chemistry, so the biggest challenge was pulling off the action sequences … and she definitely felt underprepared. “I kept telling Cary, ‘I just have three weeks of training’ and I said it so many times he said, ‘Say that in the movie,’” de Armas says. It became one of Paloma’s memorable lines, especially as she proved that three weeks was more than enough for her to hold her own.

The problem for de Armas was that after her three weeks of training the production schedule shifted, and suddenly before

“No Time” she spent four months as Marilyn Monroe in the forthcoming “Blonde.”

“That wrapped on a Friday and I was shooting Bond the next Monday,” she says. “I don’t think anyone would choose two days, spending half in an airplane, as time off between films, but sometimes good things happen.”

De Armas brought some of Marilyn with her to Paloma. “There was something magical about that, although on the first day, Cary kept saying, ‘You’re whispering,’ ” and she ended up enjoying all the fight sequences.

“Action movies are definitely not my comfort zone but it was very satisfying to do something new, something that might surprise you,” she says. She’s open to more action movies — “as long as I can do the kicks and punches” — but says in the long run she prefers roles that are deeper character studies. “I’m closer to ‘Blonde’ than Bond.”