‘Amundsen: The Greatest Expedition’ Review: An Authentic Arctic Adventure, But Mostly a Rather Icy Biopic 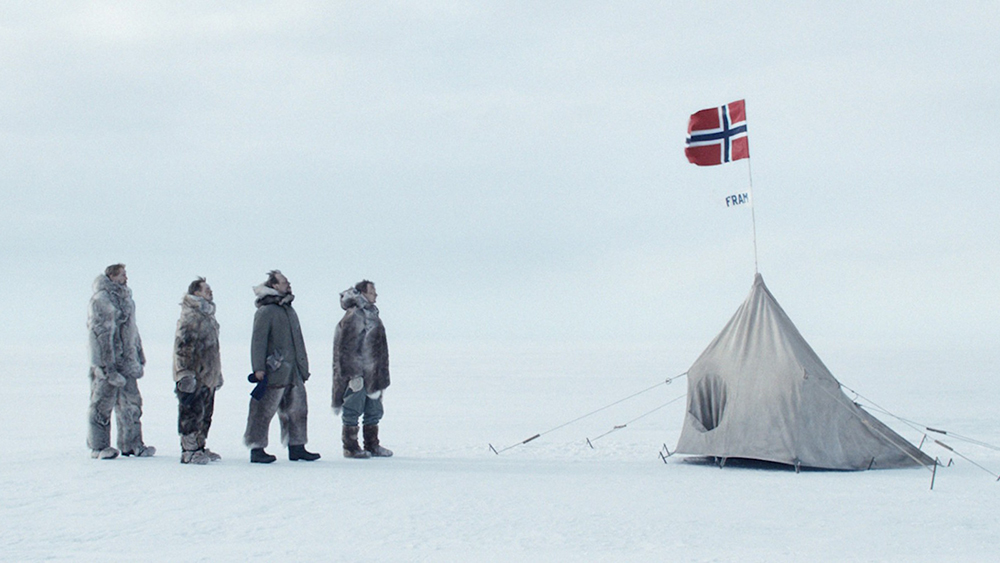 The famed Norwegian explorer Roald Amundsen led the first expedition to reach the South Pole (on Dec. 14, 1911), so when you watch “Amundsen: The Greatest Expedition,” you may think you’ve got a good idea of the movie you have in store: an adventure at once exciting and treacherous, set in the frozen wilderness, with a stoic Nordic hero at its center — the kind of man who might have been played a few decades ago by Max von Sydow. “Amundsen” has scattered moments of tense physical drama, set against glacial Arctic vistas of fantastic authenticity. You really feel like you’re there.

The movie opens with two men in a propeller plane conking out in the middle of the icy nowhere. One of them is the aging Roald Amundsen (Pål Sverre Hagen), who reveals a hawkish profile of calm, imperious, almost sneering indomitability; the other is a man who can no longer feel his feet. The movie features a number of the Arctic treks that Amundsen embarked on over the course of 17 years (one of them lasts for 7 years), and during these explorations he gets mauled by a polar bear, leads his crew in eating dog meat (from sled huskies they’ve shot), sits in a schooner for months surrounded by expanding ice floes that sound like ghosts as they slowly crush the boat, and generally acts like a man who treats survival as a pesky afterthought. Since Amundsen achieves his South Pole triumph a mere 45 minutes into the 2-hour-and-5-minute movie, you may wonder, “So when is the greatest expedition coming?”

I’m still not sure. “Amundsen” has enough adventure to tease you, all laid out with a diary-like verisimilitude that’s tantalizingly matter-of-fact. But the 2018 Mads Mikkelsen movie “Arctic” (which I highly recommend) was about nothing more than one man stranded in the Arctic, dragging himself across the icy tundra for miles and miles, trying to devise a way out, and the film’s very deliberateness was intoxicating; it didn’t cheat, but it didn’t loosen its grip either. “Amundsen,” on the other hand, has a lurching rhythm that suggests a much longer movie — almost a miniseries — that was trimmed down, rather arbitrarily, for more efficient consumption.

The movie shows us who Amundsen was when he was on the ice (ingenious, fearless, often heartless). But it also wants to paint a portrait of who he was back in Norway, and that’s where it runs into problems. The film’s star, Pål Sverre Hagen, is tall, with a warm smile, and bears a striking resemblance to the real Roald Amundsen, but he deliberately makes himself into an uningratiating cold fish — a man of forbidding single-mindedness, one who isn’t fully himself unless he’s battling the elements. He uses and discards people and doesn’t seem to take much pleasure in his accomplishments. That’s why he’s always onto the next one.

But it’s one thing for Amundsen to treat the people in his life with a kind of distracted carelessness. It’s quite another for the film to do so. “Amundsen” is a visually stately yet naggingly underscripted movie that never quite finds its dramatic center. Is it the story of a hero? An icy crank? A loner? A lover? A man who wanted to give something to the world? Or to take something for himself? The answer is: Yes, yes, yes, yes, yes, and yes. Which leaves the audience a bit bewildered. I’m all for a biopic that shows us human flaws up close, but in “Amundsen” even the title character’s most outsize defects are blurry. He’s less an enigma than a jigsaw puzzle with missing pieces.

The director, Espen Sandberg (who co-directed the 2012 Thor Heyerdahl drama “Kon-Tiki” and was then tapped to co-direct “Pirates of the Caribbean: Dead Men Tell No Tales”), tries to do too much, and ends up not doing enough. He stages a few scenes on the ice that are visually astonishing (like one in which an explorer taking a leak opens up a floor of snow into a black chasm that seems to go down a mile). Mostly, though, he tacks together thumbnail portraits of the people who were closest to Amundsen, like his brother, Leon (Christian Rubeck), who’s his close comrade and collaborator until he tries to rein in Roald financially. It seems that Roald, who still owes $20,000 on a wrecked airplane, has just purchased three more planes. He doesn’t care if he’s on the road to bankruptcy; he’s on a mission to immortality. So he cuts Leon out of the picture.

Then there’s Bess Magids (Katherine Waterson), the married woman Amundsen meets in Alaska and falls in love with. She stands by him no matter how monomaniacal he is — and that’s all the development their relationship gets. Yet Katherine Waterston, with her slightly-too-modern flip precociousness, is an ardently arresting presence. She suggests that the movie was meant to be the story of two free spirits soaring above the conventionality around them.

By the time Amundsen makes it to the North Pole, flying over it in an Italian blimp, he’s become a legend. Pål Sverre Hagen ages before our eyes. The actor was 38 when the movie was shot; Amundsen was 55 when he disappeared, never to return, while flying an Arctic rescue mission; and by the time that happened, he looked 79. “Amundsen” has some moments of stately power, but most of it is a muddled and remote experience. It was only at the end that I looked at Amundsen and realized what a great cussed character he really was. “Amundsen,” with its choppy understandings, feels like an endless trailer to the movie you want it to be.