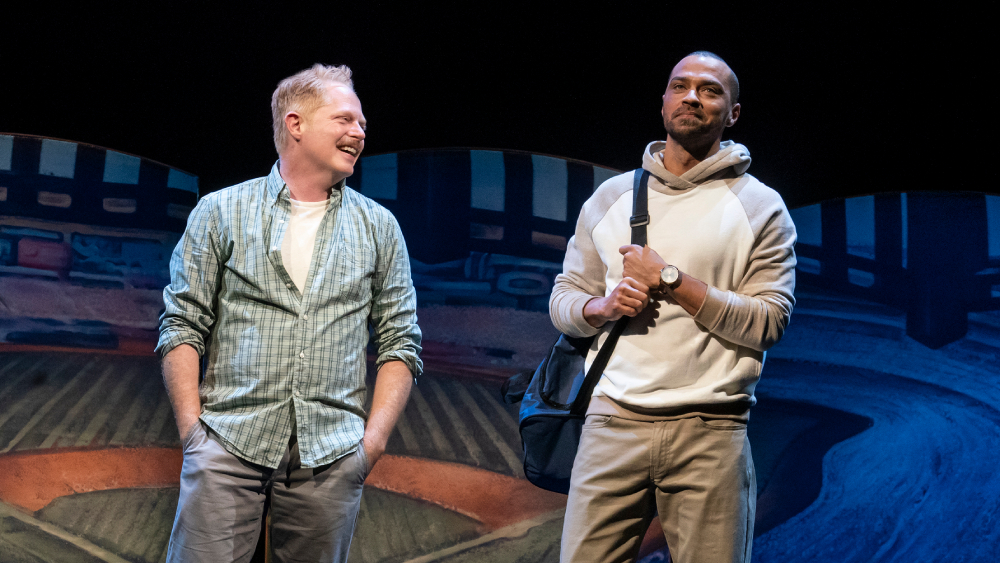 “Take Me Out” star Jesse Tyler Ferguson and the Actors’ Equity Association have released statements condemning the illegal recording of actors in nude scenes after footage of Jesse Williams performing naked in the Broadway production leaked online.

“I’m appalled by the disrespect shown to the actors of our company whose vulnerability on stage ever night is crucial to ‘Take Me Out,’” Jesse Tyler Ferguson wrote on Twitter Tuesday afternoon. “Anyone who applauds or trivializes this behavior has no place in the theater which has always been a safe space for artists & audience members.”

I’m appalled by the disrespect shown to the actors of our company whose vulnerability on stage ever night is crucial to Take Me Out. Anyone who applauds or trivializes this behavior has no place in the theater which has always been a safe space for artists & audience members. https://t.co/eYEqbQBrc6

Ferguson, who stars alongside Williams in the production of “Take Me Out,” continued by saying, “If nudity is what you are coming for… you are in for a long boring night. It’s within a challenging 2 and a half hour play with big ideas, beautiful language & remarkable acting from a company of 11 actors that you will have to sit thru as well. You’ll be bored.”

“We condemn in the strongest possible terms the creation and distribution of photographs and videos of our members during a nude scene,” said Kate Shindle, president of Actors’ Equity Association. “As actors, we regularly agree to be vulnerable onstage in order to tell difficult and challenging stories. This does not mean that we agree to have those vulnerable moments widely shared by anyone who feels like sneaking a recording device into the theater. Whoever did this knew not only that they were filming actors without their consent, but also that they were explicitly violating the theater’s prohibition on recording and distribution.”

Second Stage Theater, which produced the “Take Me Out” revival, also released a statement regarding the leak.

“It is deeply unfortunate that one audience member chose to disrespect the production, their fellow audience members and, most importantly, the cast in this manner,” Second Stage Theater’s statement reads. “Taking naked pictures of anyone without their consent is highly objectionable and can have severe legal consequences. Posting it on the internet is a gross and unacceptable violation of trust between the actor and audience forged in the theatre community. We are actively pursuing takedown requests and ask that no one participates in the distribution of these images.”

Second Stage Theater has also vowed that it plans to station more staff members inside the auditorium at New York’s Hayes Theater to crack down on illegal recording of the production.

A revival of the play by Richard Greenberg, “Take Me Out” has drawn acclaim since opening on Broadway earlier this spring. The production netted four Tony nominations yesterday, including best revival of a play and three nominations for best performance by an actor in a featured role in a play, for Ferguson, Williams and Michael Oberholtzer.