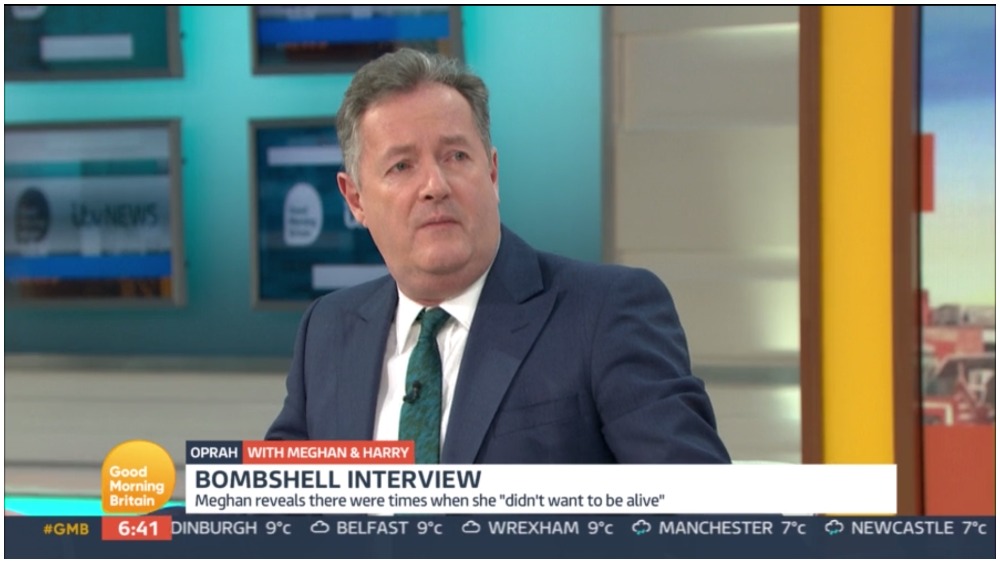 ITV chief executive Carolyn McCall has revealed that she completely believes Meghan Markle’s statements about mental health, which is at odds with ITV presenter Piers Morgan’s views on the matter.

Outspoken presenter Morgan, co-host of ITV’s breakfast program “Good Morning Britain,” suggested that he did not believe Markle’s statements during the Monday edition of the show. During the interview, with Oprah Winfrey, Markle said she had felt suicidal at times, while being a part of the Royal family. “I don’t believe a word she says,” Morgan said on the show on Monday. “I wouldn’t believe her if she read me a weather report.”

Morgan stormed off set on Tuesday, while “Good Morning Britain” was being broadcast live, after an altercation with weatherman Alex Beresford, who supported Markle, calling Morgan’s behaviour “diabolical.”

Beresford said: “I understand that you don’t like Meghan Markle, you’ve made it so clear a number of times on this program. She’s entitled to cut you off. Has she said anything about you since she cut you off? I don’t think she has. But you continue to trash her.”

Morgan left, saying: “Sorry. You can trash me mate but not on my own show. See you later.”

So @alexberesfordTV defends Meghan on @gmb and criticises @piersmorgan for what he’d said about Meghan’s mental health.
Piers walks off the set.
Surely Piers knows if you give it, you gotta be able to take it?pic.twitter.com/gmoNjMxiQy

Morgan later returned to the show and told Beresford: “What we need to do Alex is talk to each other in a civilized manner given we work on the same show on the same team. You launching into a pretty personally derogatory monologue on one of your colleagues probably isn’t one of the best ways to go about it.”

Speaking to the press during a financial results earnings call on Tuesday, McCall said: “I completely believe what she said, that the most important thing with mental health that ITV does and is totally committed to, is that we support, we get people to speak up, we listen, we say everyone has to listen and everyone has to believe because that’s how you get people to speak up. So we are very committed to that.”

Mental health charity Mind said that they were “disappointed” over his comments on Markle.

“I haven’t spoken to Piers myself, but I know Kevin Lygo [ITV managing director for media and entertainment] is speaking to him on a regular basis and has done so the last couple of days,” McCall said.

Referring to Beresford, McCall said: “Alex made an impassioned and articulate statement really. And it was quite a noisy discussion that I don’t think there was anything manufactured about that at all. I think one of the things I would stress is that ITV has many voices and we try and represent many voices on ITV every day. It’s not about one opinion. And so I think that’s what happened this morning.”

The TV Mindset, a TV & Film industry initiative that supports freelancers through mental health issues, also added their voice to the Morgan issue.

“Mental health matters,” The TV Mindset tweeted. “Black lives still matter. And our intersections need more allies and protection than ever before, as we certainly can’t rely on corporations who claim to want to ‘Get Britain Talking’ but then dismiss people when they finally have the courage to do so.”

Mental health matters. Black lives still matter. And our intersections need more allies and protection than ever before, as we certainly can’t rely on corporations who claim to want to “Get Britain Talking” but then dismiss people when they finally have the courage to do so.

“Get Britain Talking” is an ITV mental wellness initiative.